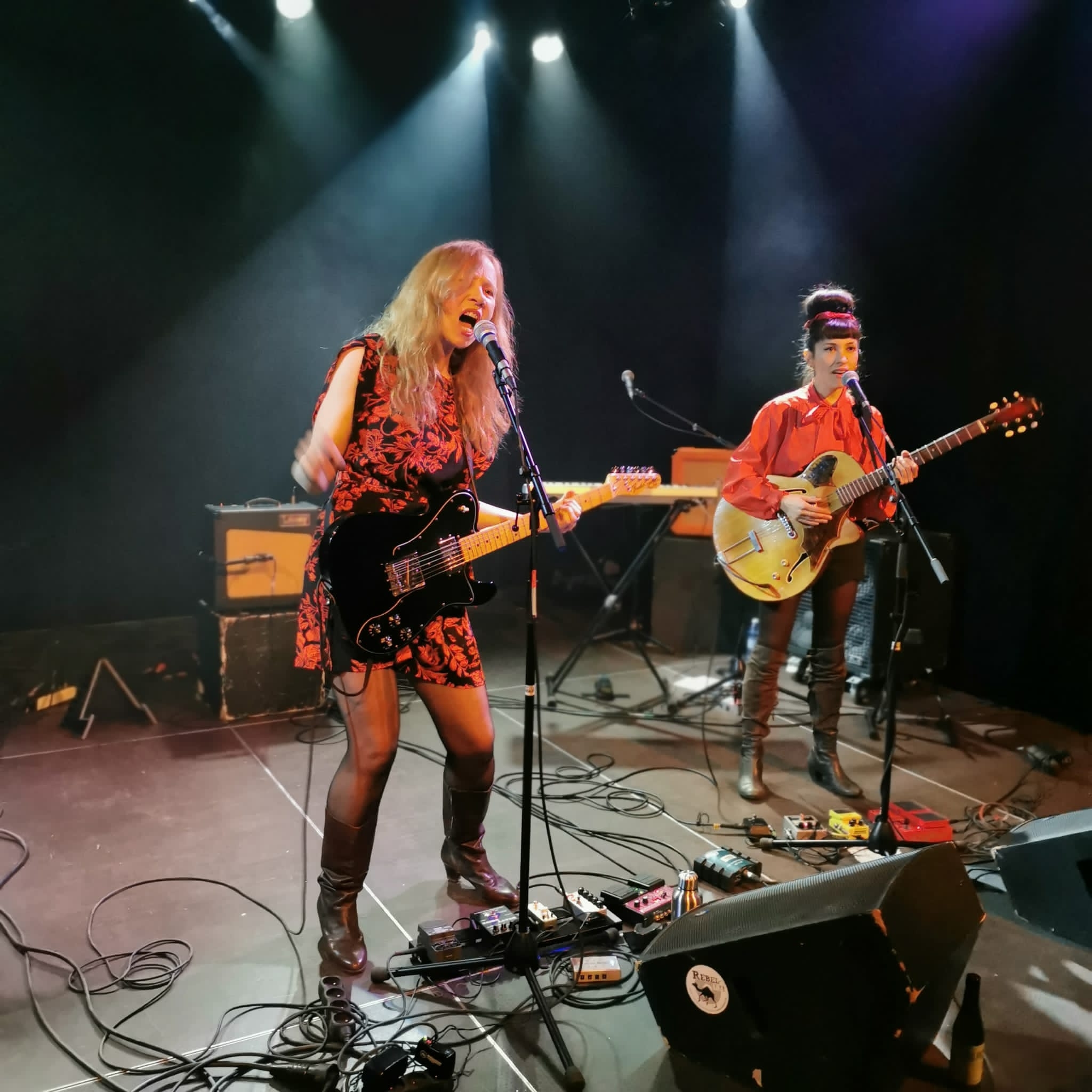 BABY FIRE « Black light, haunted rock »
Emerging from the back alleys of the Brussels alternative rock scene, Baby Fire is a female trio defined by a rock style which is full of passion, haunted, powerful and refined. Body and soul of the project, the guitar player, Dominique Van Cappellen-Waldock, grew up between London and the European capital. Music lover and avid record collector, she did the rounds of the hard rock circuit as well as the great bastions of punk such as the famous London Marquee Club.
One evening at a concert, she crossed paths with Ronnie James Dio, the emblematic voice of Rainbow and heavy metal culture hero, who was temporarily touring with Black Sabbath. He listened to her first demo tape and encouraged her to keep singing.
With her voice firmly entrenched in Baby Fire's compositions, the artist began to shape her universe through contacts with personalities she met at venues in her own country and abroad. Laetitia Shériff, Mike Moya (Godspeed You! Black Emperor), G.W. Sok (The Ex, Oiseaux-Tempête) and Eugene S. Robinson (Oxbow) are among some of the artists who have participated in collaborations with Baby Fire, as have Eve Libertine and Penny Rimbaud of Crass. In 2014 'The Red Robe' album came into being in the heart of Dial House, mythic headquarters of the British punk collective.
Close to the aesthetic defended by artists such as P. J. Harvey, Shannon Wright or Carla Bozulich, Baby Fire are in the process of putting the finishing touches to their fifth album. The release of 'Grace', announced for Spring 2022, will be accompanied by an exhibition devised and put together by Dominique Van Cappellen-Waldock. For this occasion, the musician will shine the spotlight on women's work in culture, through media as diverse as photography, painting, drawing, textile art and collage.
Alongside her group's activities, whenever the opportunity presents itself, the singer invests her energy in giving a helping hand to the local scene, inviting other female musicians to open for Baby Fire. Dominique Van Cappellen-Waldock is a member of the Scivias programme and linchpin of Magasin 4, the epicentre of alternative music in Brussels, where she is active behind the scenes. A passionate and heartfelt gift of self which has always underpinned Baby Fire's repertoire.
Baby Fire is:
Cécile Gonay (drums, violin, backing vocals)
Lucile Beauvais (guitar, keyboards, backing vocals)
Dominique Van Cappellen-Waldock (voice, guitar, loops)
https://www.babyfire.net/
https://soundcloud.com/baby-fire-1
https://www.facebook.com/babyfirebrussels/
/ BⓇⒶⓈⓈⒺⓇⒾⒺ ⒹⒺ ⓁⒶ MⓊⓁⒺ
//// 95 rue Rubenstraat - 1030
/ Brasserie Concert, Afterwork & Food.
//// Booking → jyve@tutanota.com
Avec le soutien de la commune de Schaerbek, Muzik 1030 Bar, Brussels Live Music Bars.
+ Ajouter à Google Agenda+ Ajouter à iCalendar