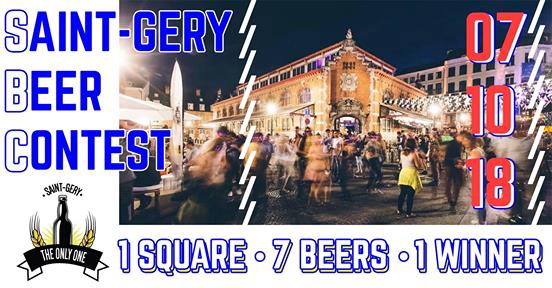 7 beers are currently being brewed in the Halles Saint-Géry and will be submitted to a vote by the public on October 7th, during a large beer tasting session in each of the key spots of the Saint- Géry ‘island’. Historically, since 1635, beer has been brewed in certain houses of the Saint-Géry area, There were over 7 breweries on the square.

Today the bars of this same square (the Zebra, the Mappa Mundo, the Roi des Belges, the Belmonte, the Café des Halles and the Palace) wish to revive and renew with this intangible world heritage.

Each participating site or venue will propose one of the 7 brewed beers. The public taste and vote. The victorious beer will officially be elected “beer of Saint Géry" and will subsequently be sold exclusively on the square.
It’s name? … Surprise !!

Come taste and choose the futur Saint-Géry's beer with us !

⚠ The number of particpants is limited